I dug this up near the Alamo 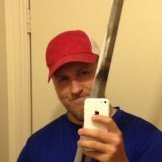 By James R.Fuller,
January 6, 2015 in Marks to be Identified