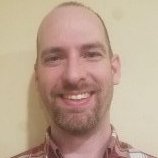 This did not go un-noticed.  I'm judging you...harshly.  This whole package is junk now.  You'd better keep it for yourself, as it would be unfair to another smith to have this abomination forced upon

I spent some time doing finish work today.  This blade is quite a bit smaller than what I am used to making.  It certainly takes less time to sand than a chef's knife. I still need to do so

Then I spent some time filing and sanding the bolsters and scales to shape.  I've got a little more shaping to do, but I've sanded through the side of my thumb, and got tired of bleeding all over the