Another "Which" HT oven question 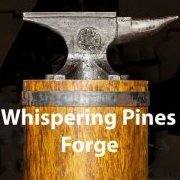 By Chris Christenberry,
November 18, 2019 in Tools and Tool Making