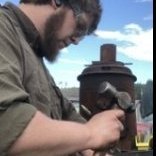 By Jaron Martindale,
January 17 in Show and Tell